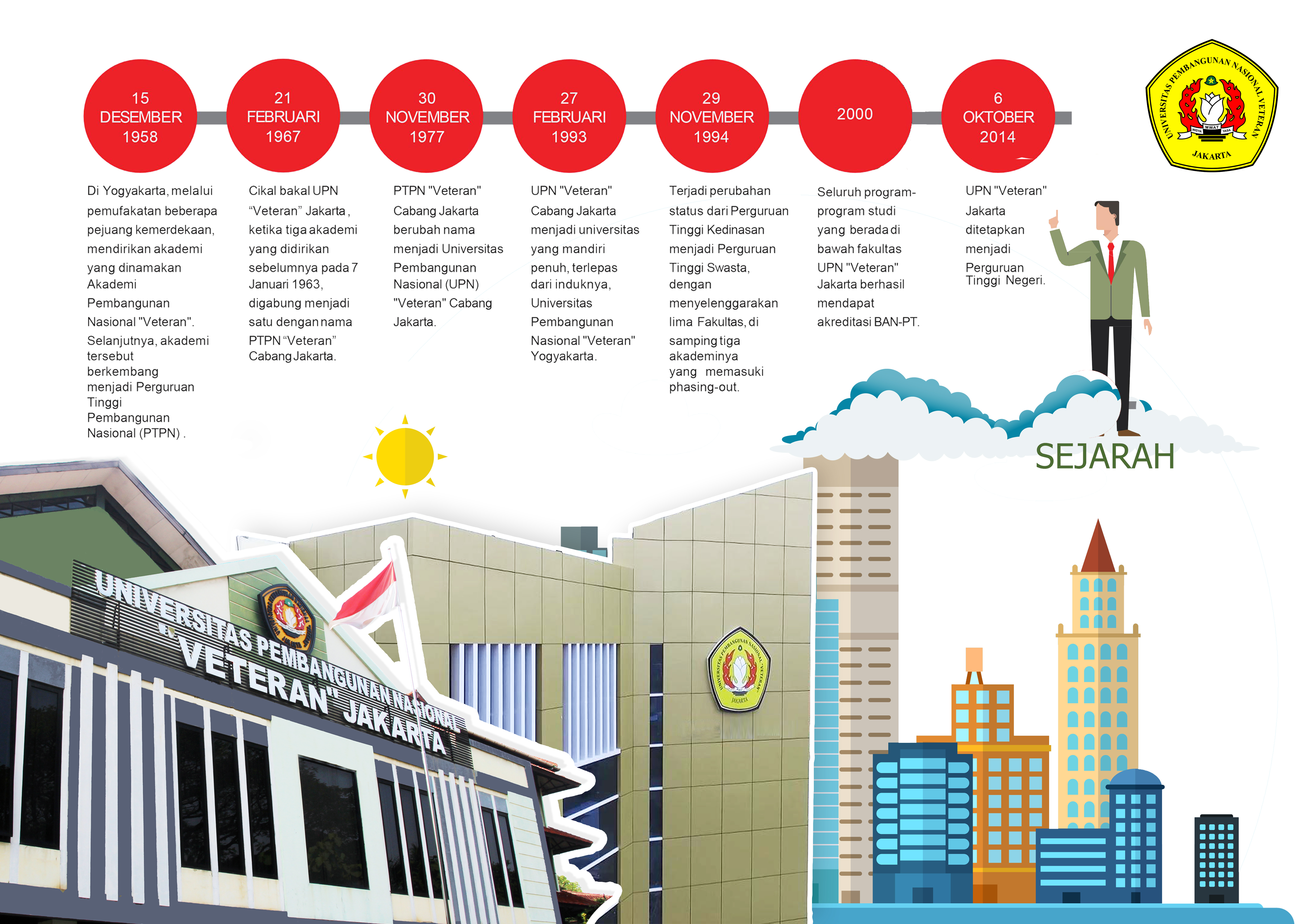 After Republic of Indonesia declared its independence on August 17th 1945, Indonesian freedom fighters shifted their role towards nation development for the betterment. On December 15th 1958 in Yogyakarta, some of those freedom fighters built Pembangunan Nasional "Veteran" Academy which had four majors: (a) Corporate Governance; (b) Agricultural; (c) Chemical Engineering; and (d) Mining Geology.

The development of University of Pembangunan Nasional “Veteran” Jakarta was started with the establishment of three academies: Banking Academy, Textile Academy, and “Jos Sudarso” Nautical Science Academy which were directly under Institute of Society and Development Studies (LPKP), and approved by notary R. Kardiman No. 14, January 7th 1963.

Based on the decree of Minister of Veteran Affairs and Demobilization of Republic of Indonesia Number 09/Kpts/Menved/1967, on February 21st 1967, these three academies were integrated into PTPN “Veteran” Jakarta.

The decree of Minister of Defense and Security Number: Kep./03/II/1993 on February 27th 1993, says that administratively UPN “Veteran” Jakarta is under the jurisdiction and responsibility of Yayasan Kejuangan Panglima Besar Sudirman (YKPBS) and its education operational technique is under the Directorate General of Higher Education of Education and Culture Department c/q Private University Coordination Region III and Health Department.

In order to increase the level of community service through link and match, University of Pembangunan Nasional "Veteran" Jakarta had abided by the decree of Ministry of Education and Culture together with Ministry of Defense and Security Number: 0307/0/1994 – Kep./10/XI/1994 on November 29th 1994, which basically says that UPN “Veteran” Jakarta had changed status from an Official Service college to a Private college, with five faculties programs aside of its three academies which had phased-out.

Furthermore, UPN “Veteran” Jakarta had become a university under the Security and Defense Department as per the decree of Minister of Defense and Security Number: Kep./62/III/1999, whereas its education operational conforms to the laws and regulation enforced in the Education & Culture Department and Health Department.